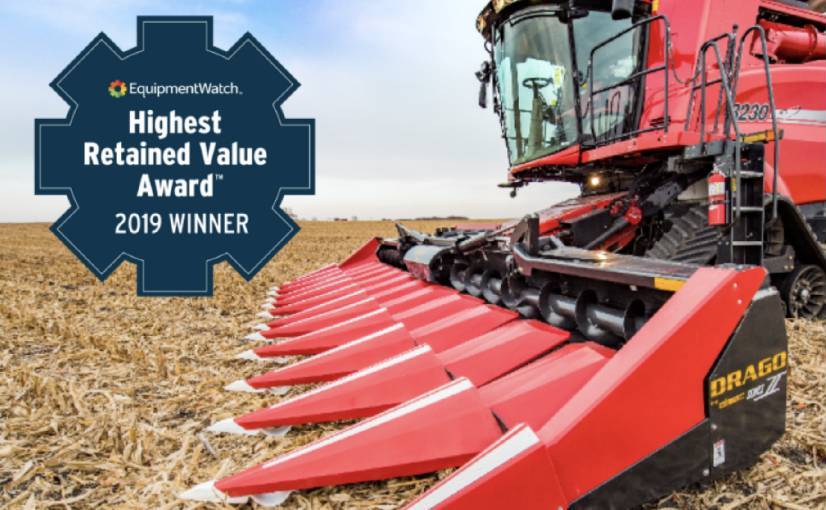 Olimac’s DRAGO 2 has been named a winner of the 2019 EquipmentWatch Highest Retained Value Award (HRVA). The award recognizes manufacturers in 30 equipment categories – spanning the construction, agricultural and lift/access manufacturing sectors – for products projected to retain the highest percentage of its original value after a five-year period based on data sourced from 70 resale platforms.

The DRAGO 2 took top honors in the corn header category. This is the second year corn headers have been included in the HRVA program since it began in 2016.

“The value retention of the DRAGO 2 proves few equipment purchases deliver a return on investment like Olimac corn heads,” says Tom Shafer Dragotec USA vice president of sales. “In today’s tough ag economic environment, we recognize residual value has a significant impact on ROI. That’s why we, and our dealers, are dedicated to delivering the highest-quality, best performing corn heads in the industry.”

For each of the 30 award categories, the most popular equipment observed on the resale channel in 2018 were sorted by their relative popularity. Any series without a model currently in production were removed. Only equipment series with at least one model contained in the EquipmentWatch Residual Values application were considered.

Once the top finalists were selected, residual values were calculated at the series level by leveraging the EquipmentWatch market activity database. The series with the highest five-year estimate was identified as the category winner.

“We are honored to be named this year’s winner in the corn header category,” Shafer adds. “The award demonstrates the long-term value of investing in Drago corn heads and acknowledges the durability and superior performance of the DRAGO 2.”